Below you’ll find texts and images that accompanied Kurt Heidinger’s lecture on “Re-Presenting Nonotuck: The Landscape Paintings of Hitchcock and Gloman”

1) The Hitchcock’s science was their religion:

“geology and the Bible speak the same language”

“The undevout  geologist  is mad”

“it is in the facts of the natural world that most strikingly discover to us the wonders of adaptation and design, and lead the mind irresistibly to infer a Supreme Being”

2) Their religion made it difficult for them to accept the theory of evolution by natural selection:

Absence from home has prevented me sooner acknowledging your truly generous present of the Final Report on the Geology of Massachusetts.—1 I assure you I feel sensibly the honour & kindness you have done me. I have as yet read only a little, but I see that there will be much that will interest me greatly; I allude more especially to your detailed accounts of the alluvial deposits, ice & water action, &c. &c. Your’s is indeed a magnificent work with its numerous & striking illustrations. I am delighted to possess the excellent plates on the footsteps,2 & I daresay I shall find some further information, though I have carefully read your several papers.3 In my opinion these footsteps (with which subject your name is certain to go down to long future posterity) make one of the most curious discoveries of the present century & highly important in its several bearings. How sincerely I wish that you may live to discover some of the bones belonging to these gigantic birds: how eminently interesting it would be know, whether their structure branches off towards the Amphibia, as I am led to imagine that you have sometimes suspected. The finding the bones of the Rhynchosaurus in the pure hard sandstone of Grindshill in Shropshire (where there are some Reptile footsteps) may give one hopes.4

I am preparing a little volume on the geology of S. America, which, when published next summer, I will beg you to do me the kindness to accept; though it is a miserable acknowledgment for your grand work.

With my sincere thanks and much respect. Pray believe me, dear Sir | Yours faithfully & obliged. C. Darwin

3) Because they express her religion, Orra’s paintings depict “sacred landscapes”—when we know this, we are invited to have a much deeper appreciation for what she shows us. We might find delight in having the same feeling she had, that our biome is “sacred”.

It is well … to look back upon the wild and singular grouping of mountains, among which this river has strangely found a passage: and also to get a view of some of those vast slopes of un broken forest, which the sides of these mountains present; and which during the twilight, are most splendid objects. In two or three instances it has happened that I have passed along this ravine in the evening, when the moon was well above the horizon; and I can truly say, that the wildness and sublimity of the scene were thereby immensely heightened: so that I felt it to be a privilege to be thus benighted. The bridge across Deerfield river is built in one of the wildest parts of this ravine; and having no piers, except at the extremities, it presents a singular aspect. Fig. 21, is a sketch of it with the scenery around, as seen by an observer looking down the river. The hills shown at the right and left and beyond are very precipitous and very high.

“As with most of these locations, access was difficult due to vegetation, re-routed roads, etc. I found access close to the bridge right on the banks of the Deerfield River. Orra’s view was much higher up and further down Zoar road. Impossible to see due to trees growing in front of the viewpoint. The River was rushing by fast as the torrential rains the day before created a very fast moving body of water. Sitting a foot away from the rushing stream. —Gloman

They are by far the most interesting waterfall in the State; and I think I may safely say in New England. At least, to my taste, the much broader sheet of water, the higher perpendicular descent, and the equally romantic scenery of the surrounding country, give to this cataract a much higher interest, than is excited by a view of the more celebrated Bellow’s Falls on the same river, in Walpole, New Hampshire [….] The proper point for viewing Turner’s Falls, is from the road leading to Greenfield, on the north shore, perhaps 50 rods below the cataract. Here from elevated ground, you have directly before you, the principal fall, intersected near the center by two small rocky islands, which are crowned by trees and brushwood. The observer perceives at once that Niagara is before him in miniature.

“Turner’s Falls has basically been dammed up with a large bridge running the span of what was once the falls. I painted in a spot that was in the lower left foreground in Orra’s image. It offered a beautiful panorama of the whole area. Orra’s point of view was farther away on a hill that is now sacred native American land. I liked my painting in the beginning before I put in the bridge in it. It feels like an intrusion in the painting as it does now in real life. A beautiful area full of history.” -Gloman

Confluence of Deerfield and Connecticut Rivers

Near the mouth of Deerfield River, in Deerfield, is a remarkable gorge through which that stream empties into the Connecticut. A greenstone ridge of 300 or 400 feet in height, has been cut through in some way or other, in width only sufficient to suffer the river to pass. This cut is in full view from the stage road between Deerfield and Greenfield, where it crosses Deer field river. Fig. 22, exhibits this gorge as seen from the eastern side of the ridge. It shows also the confluence of Deerfield and Connecticut rivers, with the romantic scenery around, and bridges across each stream: that on the right being built over the Connecticut, and that on the left over the Deerfield river. The mountains seen at a distance, through the gorge, are the primitive range passing through Shelburne. This is the most northerly point of steam navigation on the Connecticut.

“Orra’s view of The Confluence of the Deerfield and Connecticut Rivers was extremely difficult to find. Access was obscured by tree growth and proximity to private land. Once again, her point of view was from a higher vantage point and probably ½ a mile further south from my location. A beautiful spot where both rivers converge.” -Gloman

No object in the valley of the Connecticut, is more picturesque than this comical peak of red sandstone [….] This mountain overlooks the site of some of the most sanguinary scenes that occurred during the early settlement of this region. A little south of the mountain the Indians were defeated in 1675 by Captains Lathrop and Beers: and one mile northwest, where the village of Bloody Brook now stands, (which derived its name from the circumstance,) in the same year, Captain Lathrop was drawn into an ambuscade, with a company of “eighty young men, the very flower of Essex County,” who were nearly all destroyed

“I’ve always loved this view from the fertile flood plains of Hatfield and Whately. It was hard to get to the exact spot where Orra was. She was set up around the barn in the distance of my painting. Trees had grown up and the property was private. Like the View From MT. Holyoke, this spot was and is a popular destination for travelers near and far. We had storms that day and the sky managed to break open late in the day. The iconic Sugarloaf stood out against the monumental clouds. The Mountain has always served as an orientation point in the valley and is loaded with Native lore. From the top the view is spectacular looking south towards the Holyoke Range.   -Gloman 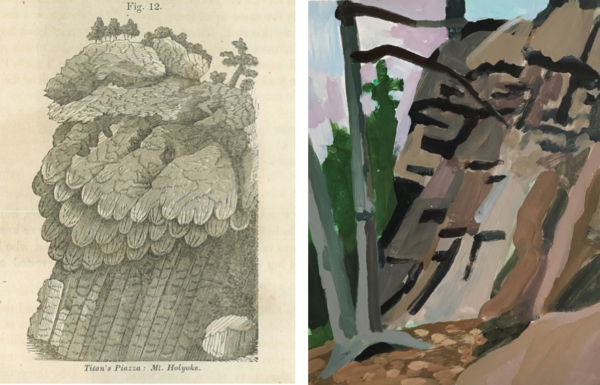 Less than half a mile south of the point where the road that leads to the Prospect [now called Skinner] House on Holyoke strikes against the steep part of the mountain, and turn northerly, may be found an interesting and unique example of greenstone columns [….] It seems as if you were standing beneath so many large hexagonal kettles, set closely together. Yet when you think how feebly the columns hold on upon.

“Titan’s Piazza is a very short walk from the road. Once again, a very open view of this amazing rock structure is blocked by tree growth. Finding a vantage point to paint was difficult due to a very steep angles talus pile. I managed to perch on a small level place to paint my view.”-Gloman

Standing upon Holyoke and facing the south, one has directly before him, and as it were under his feet, the deep gorge between Holyoke and Tom, through which Connecticut river passes [….] if one can work his way along the western face of this precipice at low water, he will find, near where the rock passes under the river, the tops of numerous columns of great regularity; their upper portions having been removed by the force of the stream, which for so many centuries has been battering this cliff with logs and ice. By referring to the next part of my Report, a more definite idea can be obtained of these columns. But from what I have now said, every intelligent man will perceive that they are very similar to those on the coast of Ireland, which form Fingal’s Cave and the Giant’s Causeway. The nature of the rock too, is essentially the same in all these places. Why then may I not be permitted to denominate this rock, Titan’s Pier? At least, may I not hope by this description to attract the attention of visitors to Holyoke, to this spot? Hitherto it has been passed unnoticed                               .
Edward Hitchcock, Sketch of the Scenery of Massachusetts J.H. Butler, Northampton MA, 1842

“Titan’s Pier is really only accessible by boat or kayak. I found a great viewpoint on the opposite bank of the rock formation in almost the exact spot that the figure on the lower left of Orra’s Image. Her viewpoint was much higher up and a bit farther away from the rock than I was. Impossible to see now because of tree growth and Interstate 91