Environmental: “environment” means that which encloses.

Field Environmental Philosophy (FEP) is a pedagogy that takes students outdoors to investigate what encloses them. What they find is that the environment is alive, and that their own lives are consanguineous with this bigger life, the bios. Wisdom is called forth and accompanies the student’s discovery that they are not alone at all (i.e., as “individuals”)  and are part of the bios, and this wisdom manifests itself as acts of caring and concern—of love—for life, as it is contained in the form of their own self and as it is shared by all the denizens of the bios.

The experience of apprehending the bios is transformative, because by exposing how human identity is symbiotic—how it is constructed significantly by the environment—FEP generates new possibilities of thought, behavior and identity that can be realized: including that of the biocitizen that ecologist Aldo Leopold described in A Sand County Almanac. All of these experiences—the apprehension of the bios, the epistemological openings that follow it, the possibility and perhaps necessity of redefining identity—require students to be philosophical. There is no other discipline besides philosophy that can fold these experiences and processes into a unified, focused investigation. The goal of philosophy, said Socrates, is to “know thyself.” FEP achieves this goal; and instead of being rooted in idealism as Socrates was, our philosophy is rooted in biocultural history (i.e., natural and cultural history): and so our maxim is “where you are is who you are.”

FEP is an active physical way of learning that brings students into direct contact with the subject they are investigating. Direct contact is key, because it calls upon the entire identity of the student, not just their brain, to apprehend the subject. The content the student absorbs is sensual and emotional (i,e. existential), as well as categorizable and measurable (i.e, empirical, scientific, historical). 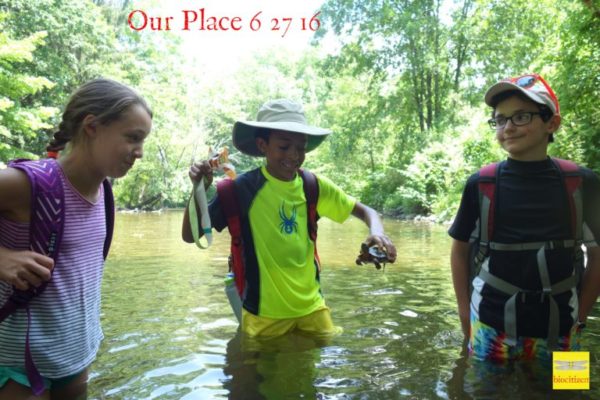 When FEP students learn how they are constructed by the environment, they are moved to care for the environment—because they have learned they are the environment. FEP creates and shapes “character” in that very archaic way that education of any substantial kind does. What makes it especially valuable at the beginning of the Anthropocene Era is that it creates biocitizens who are, actually, prepared to evolve to suit rapidly changing environmental conditions.